Mystery at the Museum (My Museum)

January is my month of purging.  Though I rarely throw anything away -- or even better organize things for that matter -- it is, if nothing else, a trip down memory lane.  The three hours I'm spending not watching NFL this season is giving me more time than ever to go through boxes of treasures.
This very well could be the RAREST item in my collection: 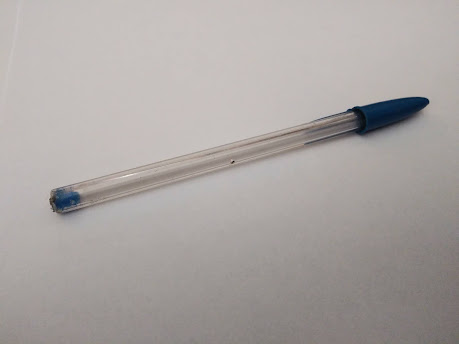 But, it’s just a ballpoint pen!
True. However, every item I've saved tells a story (even if I can’t remember what that story is now). This one is special!

First of all, I believe the ballpoint pen changed the world — and not for the better. A pen was once a valuable and sacred object to be nurtured and cared for. You only had one, so you took great care of it. If you wanted to write, you needed your pen. Also, because pens were so messy, or at least potentially messy, you had better take your time. Be mindful.

The ballpoint pen changed all that. It was so cheap it was even sold in multi-packs. They were so cheap that companies would put their names on them and give them away. Give them away!  They seemed to multiply like Tribbles (A late-60s TV show reference). As a result, if you lost one, no bother. Just go get another one.

Ballpoint pens were practically trouble-free, so you would write with reckless speed and abandon. Mindlessness — at least for me.

And then there was the cap. It wasn’t secure. Caps routinely got taken off and placed somewhere — lost. No worries, the thing worked without one.  Another cool feature about the ballpoint pen was that they could be turned into weapons: Take off the two end caps and pull out the ink cartridge and you have a spitball rifle barrel.

So, as you can see, these things didn’t survive intact for very long. This brings me back to this particular object: This is the ONLY ballpoint pen I’ve ever owned that was purchased new, used all the ink, all while retaining all the original parts. The ONLY one. The ONLY one, to my knowledge, in the history of the world. Go ahead, ask around. I challenge you to find another one -- at least this old (mid 70s).

Take a moment to look around your own life. How many pens do you see in your environment?

Next time you pick a pen up, wonder about it.  Slow down.  Be mindful.

Take a few minutes to study the history of pens and writing. It’s quite a story. And you’re looking at perhaps the most wondrous of them all!
Carpe diem Life,
David Kuhn