Well, I broke down and watched the Super Bowl.  Tradition.
A few of takeaways:
1) I haven't really missed anything all year.
2) The NFL is spending hundreds of millions of dollars to try to correct something -- though I'm not sure where all the money is going.
3) The halftime show was ???
I used to love professional sports.  Even to the point that collecting baseball cards was a major passion of mine.  A short story:
When I was maybe twelve, I read an ad in the back of a comic book. Send in money for postage, and  someone by the name of Ken M (last name withheld to protect the innocent) would send you his HUGE catalog full of comic books, non-sport cards, sports cards, etc.  So, I did.  What I receive was AMAZING.  Some of it typed, single spaced, two-sided pages and others hand-written -- FULL of stuff you could buy. That started a several year love affair with Mr. M and his amazing catalogs.
We'd work our tails off around the house and neighborhood to earn money to send off for a cards.  Then, a few weeks later, a small box would arrive full of cards.  A lot of it really old and now somewhat valuable.  Including early Topps Jackie Robinson, Ted Williams, Mickey Mantle, Willie Mays . . .
For once in my life, I was the kid who had access to a gold mine of treasure that none of my "rich" friends had -- and I certainly wasn't sharing that information!  Okay, I did share with a few close friends.
Turn the page to this past December.  I was visiting one of those old friends and asked if he remembered Ken M.  "Not only that, I'm sure I still have one of his catalogs in a box in the attic!"  Off we went.  Not only did he find one, hen he handed it to me, I saw that it was addressed to me. 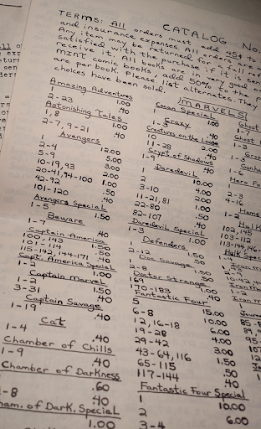 It was one of mine that I had shared with him in 1974.  "I wonder if he's still alive?"
That question prompted an internet search and the finding of ONE Ken M.  So, I wrote to him (if he were in fact the same man) to let me know how much he and his catalogs meant to me.  Last week came the reply.  YES!  Mr. M is alive.  He couldn't believe that "someone out there" still remembered him.  Turns out that in the early 70s he was right out of the service and wanted to prove to his parents that he could start and run his own business.  It didn't last long, but he said he still had a collection and building of stuff -- all to be turned into a museum.
Collections.
I'm reminded of all this because my grandchildren are in town and they found this: 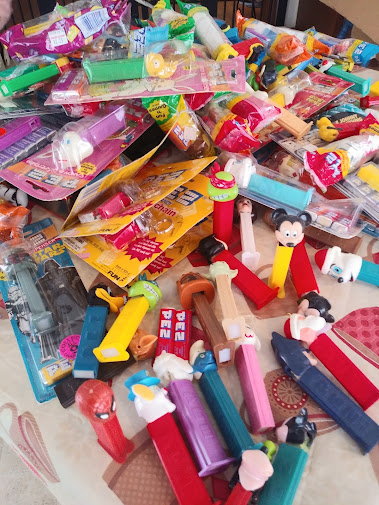 A box full of something else I collected years ago:  PEZ.  Maybe a couple of hundred.
Collections.  At least for a few hours on this cold and icy day, providing enjoyment.  Who knows, maybe some day all that stuff will end up in a museum?
And what WAS up with that halftime show?
Carpe diem Life,
David Kuhn