It’s that time of year:  “wild” orange daylily time.   Everywhere you look — including along the ditch in our back yard. 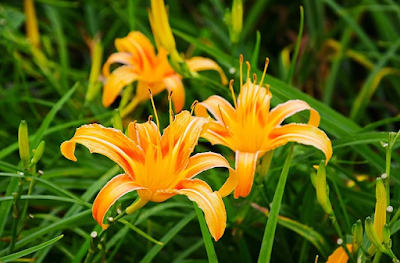 According to Ray Allen, Founder of AmericanMeadows.com, Daylilies, the most popular perennials of them all.

In the United States and Canada, it all started with the original "wild" orange daylily.  In fact, many North Americans think the tough old orange one they see in old gardens and along roadsides is a native wildflower, but it really isn't. No daylily is native to North America; most hail from Asia. But that old orange Asian species, called Hemerocallis fulva, is still popular, and it's everywhere. In fact, in its homeland, China, and Korea, it's more than just another pretty flower; the buds have been roasted and eaten as part of the Asian diet for centuries.

These things are tough.  Really tough.  If you want to go to the countryside and rob a few from the ditch bed, you’ll need a strong shovel and a stronger back.  Maybe that’s because they are no stranger to adversity.

Over the past couple of days, we’ve had some pretty torrential rains causing flash flooding.  I looked back the other day and daylilies were completely submerged in rushing, debris-filled water.  Still, even after another storm last night, there they are in all their orange glory.  A little bent over, but nothing a day of sunshine won’t cure.

An old zen saying goes something like, “What the student calls a tragedy, the master calls a butterfly.”  In this case, it’s called a daylily.  Good to think about as we travel through these rough and winding roads these days.